Variation on a theme

I've been quite busy over the last week. Not only bunny-chasing around the house, but as usual I have been spinning. Last weekend, I was part of a spinning demonstration at the National herd dog championships in Lier, Norway. Friday was just exhausting, as we had mostly pre-school kids coming in to watch us. They were just too small to understand what was going on, and were mostly just interested in sticking their fingers into the wheel... sigh. I almost made a little boy cry, when I told him he couldn't try the wheel. My spinning wheel was taller than him, and he was wearing rubber boots and it was just not going to happen.... Can't please them all, heh?

Saturday was better, lots of nice people coming in and we all had a great time. Wool was provided for us to spin, but the quality was horrible. I was a bit frustrated by this, as the whole point of us being there was part of an ongoing project to promote Norwegian wool. The fibre was supplied by one of the leading wool mills in Norway, but I think it's bad press to give us such crummy goods. Oh well.
At least we spun something, but I would much prefer to have brought my own fibre to spin.

As I was stuck at my wheel both days, I didn't get to have a look around. But there were herding competitions with live sheep, lots of sheep breeds on display, and all kinds of sheep related stuff.

On another note I have been knitting a bit. I found a great FREE pattern on Ravelry, and it was so easy and quick, that I made three pairs!

The main pattern is bamboo stitch, basically just ribbing (2k,2p) and on every fourth round you make a yarn over before the 2 knit stitches, and slip it over the knit stitches as you go. Easy peasy!

They are finished with a nice ruffled edge, making them a bit feminine. If the recipient is male, just skip the ruffles, and they are just straigth tubes.

For my first two pairs I used self spun yarns, in rather funky colours. This easy pattern is great for multicolours, as the pattern itself don't compete with the yarn too much. 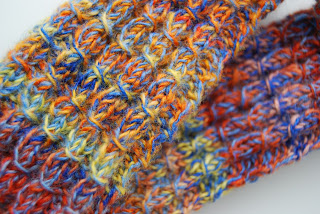 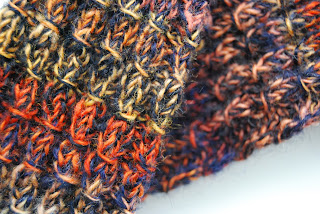 This last pair is knit with some left over commercial yarn, an Alpaca and Peruvian wool blend. The pattern don't require a whole lot of yarn, I knit these on 3.5mm needles, and one pair weighs just 35 grams. 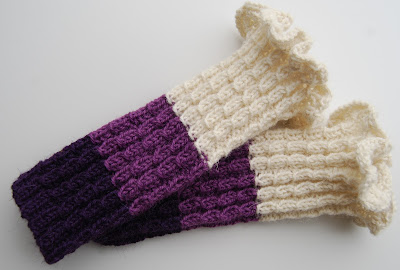 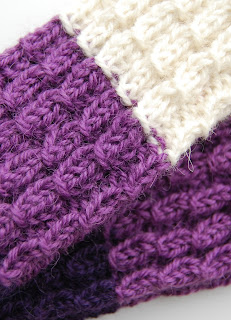 Have you been knitting anything lately?

Posted by PinhousePlaymate at 15:39 2 comments:

This post is not sewing related in the slightest. Maybe remotely related to yarns and spinning, but most of all it is 100% related to pure cuteness!


Sunday was a glorious sunny, crisp autumn day, and I was invited to a spinning get-together at a new friends house. She lives on her small farm in the woods, with all her animals. She keeps sheep, goats, a llama called Max, dogs, chickens and lots of angora rabbits. We were a small party of 7, but we had a wonderful time in a small cozy house overlooking the big grazing paddock dotted with sheep. We spun, had lots of tea and goodies, and talked and spun for hours.

I got to know this woman at a local spinning group I have been attending once a month. At the last meeting, I got the impression she needed to find new homes for two of her angoras, and when I was at her house on Sunday I got to meet them.
The first one was unhandled, and very skittish, and would be quite the project. But the other one was a very inquisitive, calm and friendly little one, and I just fell in love. The owner had decided that if nobody wanted any of them, they would be euthanized, there was just no way she could keep them.

I love all animals, and I feel that if I can help, I will. So, long story short, I went home with a bunny! 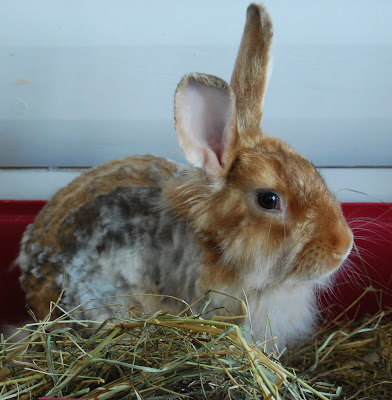 And this is he! Isn't he cute? He is about 7 months old, and is a Satin angora, meaning he has a little less fur than his angora relatives. Angoras get massive coats, and also has tufts on the ears and long fur on their faces and feet. They need to be clipped every third months, but mine will make do with 2-3 haircuts per year. As you can see, he has just gotten one, and is looking a bit sad. His fur was matted and in quite a state, so it needed to go. But it will soon grow back, and he will be a fluffy little thing again. The fur makes super soft silky yarn, and is warmer than sheepswool.

I never planned for this, and we had a rather unenthused welcome from the Mr. when we arrived home. I couldn't care less, I love my new furry friend. And I can barely wait to spin his fur into silky yarn! But best of all, is the feeling of having saved this little creatures life. 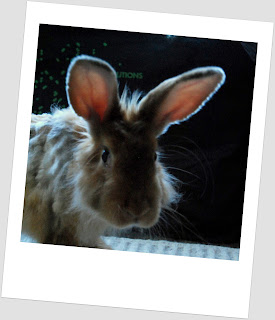 Posted by PinhousePlaymate at 01:52 9 comments:

Moving out of the comfort zone

A few weeks ago, I attended a spinning extravaganza in Lillehammer, Norway, at Scandic Victoria hotel. It was hosted by Spinnvilt, the leading store in Norway for everything spinning related. It was a three day event (I sadly had to pass on the first day, though), and it was just awesome!

I rarely go to events, as I sometimes have a hard time with crowds. But I'd heard so many good things about this one that I just had to go. Besides, the spinning community is very friendly and including, so having a bad time is not very likely. We were about 50 participants there. We had a big conference hall to park our spinning wheels in, and we spun and had fun from 0900 in the morning both days and until about midnight for the toughest of us :) There was an all you could drink coffee bar, and fruits and pastry served on buffet and a lunch meal both days included. We also got a goodiebag with several samples of different luxury fibres and other fun stuff!


There were friendly competitions too, one team event where we were to name ten different fibre samples just by look and touch. I learnt lots! And also one speed-spinning contest, where the object was to spin the longest thread out of 5 grams of superfine merino, in 20 minutes. It was really intense, and the only time the room was actually quiet :D There were great prizes, and everybody had a really good time.


We also had several great demos from two super talented ladies, one was Kate Sherratt from Ashford, NZ, and also Maria Shtrik, from Russia (her website is in Russian, but one can always look at pictures, or follow her on Instagram). It was so inspiring to see the endless possibilities you have with wool, and different tools like carders, blending boards and hand spindles. I am so sad I didn't take pictures, but I had way too much fun. The two photos above, is borrowed from Tóve, our gracious host.

I am a notorious thin-spinner, and all my yarns tend to be really fine. I was challenged to spin out of my comfort zone, and go bulky. For anyone familiar to spinning, this is a well know phenomenon. Ones hands seem to make what they like to work with, so doing the opposite is hard. I love fine knits on small needles, and I am also a perfectionist so I was having a hard time to just let go. I have thought about this a lot, and sometimes, being a perfectionist kills creativity and stop you from evolving different skills. So I felt this was an important task!

At the spinning event we also had a so called fibre-table. It is basically a big table filled with fibre that has been donated by all the participants, and the huge pile is free for everyone to play with. This means you get the chance to spin fibre unfamiliar to you, or just have a go at lots of colour and texture. On the table there were two drumcarders mounted, so everyone could try their hand at using these tools as well. Blending batts of colourful wools and even glitter :) Genious!

At first, I was a bit shy about it. But with some encouragement, I made some batts for my bulky yarn. Here is the result. 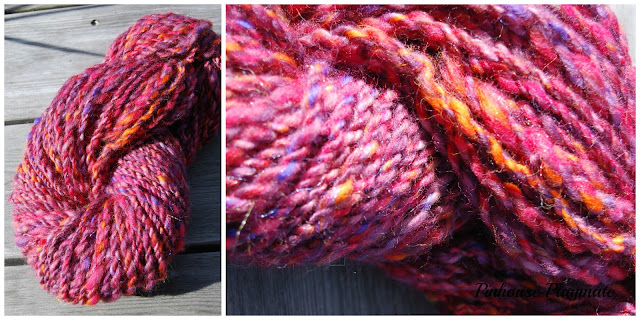 The photos don't do it justice at all. I am very pleased with it! Spinning thick was very difficult, but once I got used to it, it was fun, and I was soon back at the table for another batt. 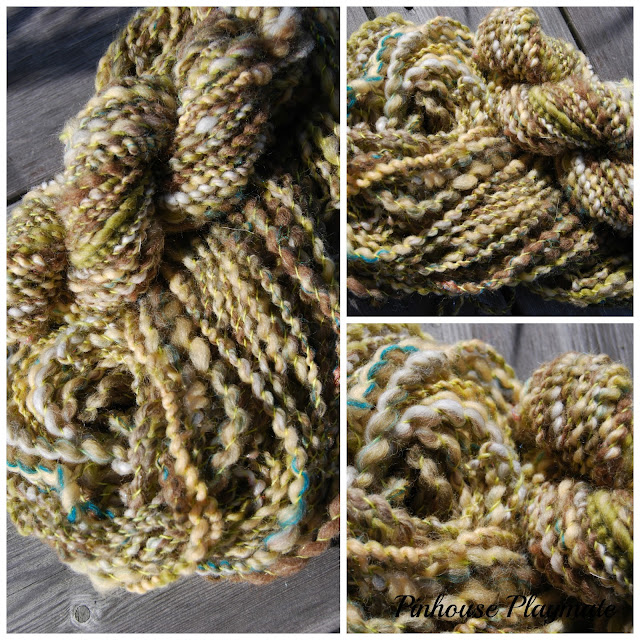 I used a slightly different technique here, plying one thick thread with one very thin one. The result is a faux bouclè. I really want to experiment more with this, but my grandma's spinning wheel is not suited for thick yarns, as the orifice is small, and also the bobbins. Guess this means I am saving up for another wheel ;)

I was so inspired when I got back home, and I had a go on my own carder. I used a roving I dyed myself, just pulling it up into smaller chunks, feeding it through the machine once, while sprinkling some firestar (glittery bling) into the mix.

It's so much fun to see how the colour blend and mute, and the effect it creates when spun. I spun one medium thick thread, and again plied it with a thin one. This is as much as my spinning wheel will take :) 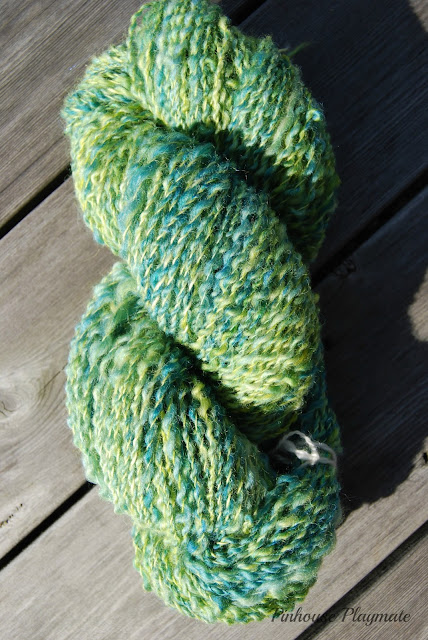 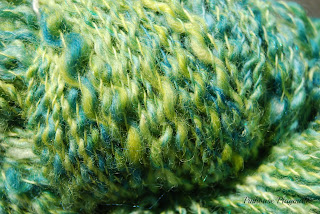 For me, this was the highlight of my spinning year (apart from getting my wheel of course!). I met so many lovely, fun and inspiring people, and most importantly, I evolved. I feel like I have taken a few more steps on some journey. Who knows where all this wool is taking me :)

Posted by PinhousePlaymate at 15:54 10 comments: 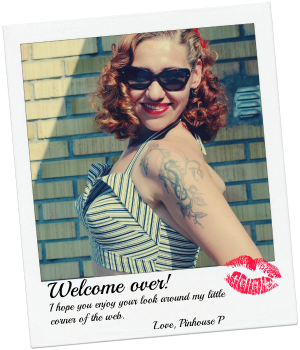